Connie H Lee
08:08 11 Jun 22
Highly recommended Dr. K Patel. I had my teeth extraction in the end of 2020. Dr. K was very patient to explain what I might experience before the extraction and gave me helpful instructions via Facebook message.

J Williams
16:58 31 Mar 22
I would highly recommend this Dentist.As a very nervous client I have no problem having treatment at this practice.All the staff are helpful, and when my treatment is being carried out the reassurance and care is excellent

Martyn Ewen
10:05 30 Nov 21
Excellent service phoned early morning and they got me in within half hour for emergency treatment on tooth ache very informative on after care

Robyn Barnes
15:31 07 Jul 21
A fantastic service from start to end. Thank you to Krupesh and Lucy for making me feel so at ease. And a special thank you to Keileigh for my treatment. I am one very happy patient.

Catherine Pond
08:14 11 May 21
I could not recommend Krupesh and his friendly team more highly for the high level of professionalism they all demonstrated during my extensive dental treatment which started prior to lockdown and carried over until now: 2 root canals with crowns and a frontcrown. Furthermore, this work was complicated by the level of details required by the front crown. I could not be happier with the results. Krupesh is professional and explains in details his work strategy as well as consistently following up with email check ups.

Nikki Dare
13:05 05 Feb 21
A friend recommended me to Purlys as I had some dental pain on a Friday. Krupesh kindly saw me out of hours and quickly identified the problem and I underwent root canal a couple of days later. He was professional and I felt confident with his advice and he has since followed up with me by email. Highly recommend.

Emma Thompson-Hollis
12:58 16 Oct 20
Thank you so much for looking after my autistic son today.After we got in the car my son said he felt so happy with your dentist and practice, he would like to come again. He says thank you to the nurse and Mr Nitin Kotecha.Lovely practice and staff would recommend.

Rebecca Balls
15:42 30 Aug 20
Highly recommended dentist. I do not live locally, I was visiting family but had a dental emergency. I spoke to Krupesh who was really helpful and friendly, and he arranged a remote prescription for antibiotics to be sent to Sainsburys for me. I could not have been more appreciative. Thank you SO MUCH.

Thomas Pond
01:04 10 Feb 19
Used this dentist twice now and it's exceptional. Both times I've received an appointment on the next day of me calling and the first time was to get some retainers fitted because I broke my previous pair and it was much cheaper than other places, they did a good job too. I saw the hygienist last week to get a thorough clean of my teeth and gums. The dentist was very nice and polite and did a 10/10 professional job. I couldn't recommend this dentist more.
See All Reviews Write a review

Contact Us
Have a question? Appointments Send a smile selfie 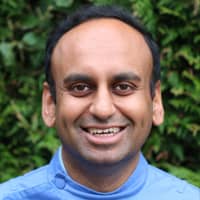 Anup has been an associate dentist at Purlys since 2008. He also works at Guy’s and St Thomas’ Hospital in the Departments of Paediatric and Restorative Dentistry, where he is a Speciality Dentist.

A graduate of the University of London, in his final year he was awarded The College Drapers Prize for the best overall clinical student. He was also nominated for the University of London Gold Medal, and as a result was awarded a Proxime Accessit to the University Medal. After graduating, he completed his Vocational Training with the London Deanery. Wanting to gain further clinical skills in all aspects of dentistry, he decided to pursue work in the Hospital services. He worked as a Senior House Officer in Restorative Dentistry, followed by Oral & Maxillofacial Surgery, and subsequently Paediatric Dentistry, with each post lasting a year. He gained considerable knowledge working under many of the country’s top consultants in these years. In 2007, he completed his post graduate examinations and became a Member of the Faculty of Dental Surgery at The Royal College of Surgeons of England.

His particular interests are in adhesive dentistry, oral surgery, dental implants, paediatric dentistry and the treatment of nervous patients.

Back to our team

Ask us a question

Repair worn-down teeth that have been badly chipped or stained, providing you with an improved smile.

Enhance the brightness of your smile in the comfort of your own home.

A smile filled with confidence is a stunning feature that most people desire, and we offer smile makeovers to help you to obtain it.

Purlys Dental Practice cares for you and your children, and we want to make sure all your family members have healthy smiles.

If you want to enhance your appearance and give your cheeks, lips, chin or skin a youthful boost, dermal fillers may be the right treatment for you.

Invisalign® is an almost invisible, discreet and modern treatment to straighten your teeth with the help of removeable clear braces that are designed just for you.

Ask us a question